This museum exhibits Ukiyo-e prints and paintings produced in Osaka mainly in the Edo period. While in Edo area there are many Ukiyo-e paintings of beautiful women and scenery, in Osaka area most of Ukiyo-e paintings are of portraits of kabuki actors who played in kabuki theatres in Dotombori area.

In this feature exhibition, we focus on all kinds of ume blossoms. Osaka was considered the “nation’s kitchen” in the Edo period, and was often seen as a town of merchants, but ume blossoms also played an important role. Anciently in Kokin wakashu kanajo (anthology of the waka form of Japanese poetry, dating from Heian period), in a waka “Naniwatsuni sakuya kono hana fuyugomori imawa harubeto sakuya kono hana” (Although having been hibernated in the winter, this flower in Naniwatsu is blossoming now in the spring), “kono hana” (this blossom) indicates ume blossom. In a kabuki play “Sugawara denju tenarai kagami”, Osaka is referred to with an episode of an ume tree.

Ume blossoms are some of the first blossoms to open during the year. They can be seen not only in Ukiyo-e, but also used as a pattern on kimonos, a family crest, and a name of a character in kabuki plays or used as a name of actors. Please enjoy ume blossoms in Ukiyo-e paintings.

This is one of the three most popular kabuki plays and are still often played in theatres. The play is based on the life of Sugawara no Michizane, and the story is consisted of twelve scenes including his deportation to Dazaifu and Tenjin legends. The lives of triplets, Matsuomaru, Umeomaru and Sakuramaru are also told in this play.

In true history, Sugawara no Michizane was deported to Dazaifu, after falsely accused by Fujiwara no Shihei of treason. On leaving Kyoto, Michizane, who loved ume blossoms, wrote a poem; “Kochi fukaba nioi okoseyo ume no hana aruji nashi tote haru na wasureso” (When the east wind blows let it send the scent of ume blossoms. Although your master is gone, do not forget spring.) It is said that ume blossoms then flew to Dazaifu and took root to be with Michizane. This legend are also told in this play as “Tobiume”(flying ume blossoms).

Sugawara no Michizane’s family crest is the shape of an ume blossom, so are the crests of Kitano Tenmangu and other shrines and temples related to Michizane. In this play, ume blossoms are printed in the costume of Kan Josho (Michizane) and Umeomaru (because of his name). Thus you can say this play is full of ume blossoms.

Kamo zutsumi (The banks of the Kamo river)

Kariya-hime, Kan Josho’s adopted daughter, falls secretly in love with the emperor’s brother, Tokiyo. On the day when Tokiyo goes to worship at a shrine, Sakuramaru, who serves Tokiyo, and his wife arrange the dating of Tokiyo and Kariya-hime at the Kamo zutsumi. This dating is discovered later, and Fujiwara no Shihei accused Kan Josho of treason.

Kuruma-biki (The struggle for the carriage)

Takebe Genzo, Kan Josho’s former student, teaches students at a terakoya in Seriu village. He has given shelter Kan Josho’s son, Kan Shusai, but Fujiwara no Shihei is about to reach him. A child who is put forward as a sacrifice is Kotaro, Matsuomaru’s son, who had been secretly admitted to the terakoya.

Hippo Denju (Transmission of the secrets of calligraphy)

Kan Josho was ordered by the emperor to choose his heir in the art or calligraphy. Sachubenmareyo is fully confident that he will be chosen, but Kan Josho chooses Takebe Genzo, Kan Josho’s former student who has been banished because of a love affair with a maid, Tonami. Kan Josho appoints him as his official successor and gives him all his secrets of calligraphy, but doesn’t forgive his past affair and tells him to go away.

While he is waiting for the ship to Dazaifu to be prepared, Kan Josho visits and stays at his aunt, Kakuju, living at Kawachi no kuni Haji, to say goodbye. On the morning of departure, a false escort came by the conspiracy of Sukune Taro and his father, Hyoe. Subsequently, Terukuni, a real escort arrives and finds Kan Josho hiding in the house. The false escort took wooden statue instead of real Kan Josho. Sukune Taro and Hyoe are executed for this act and Kan Josho leaves for Dazaifu.

Being asked by Fujiwara no Shihei to assassinate Kan Josho, Sukune Taro and his father, Hyoe, plans to abduct him by false escort, who is staying at his aunt, Kakuju. But the plan is overheard by Kakuju’s daughter and Taro’s wife, Tatsuta no Mae, so Taro kills his wife and put her under the water in the pond. There is a belief that a rooster placed above a dead body is induced to crow any time of the day, so Taro placed a rooster on the pond to let it crow as a false signal of the coming of the escort.

The triplets gathers to celebrate their father (Shiradayu)’s 70th birthday. Matsuomaru is serving for Fujiwara no shihei and Umeomaru is serving for Kan Josho. They begin arguing. Umeomaru wishes to accompany Kan Josho to Dazaifu but his father doesn’t let him. On the other hand, Shiradayu disowns Matsuomaru. Sakuramaru commits hara-kiri (seppuku, suicide) to take the responsibility for Kan Josho’s deportation.

Kan Josho, who is leading his quiet life in exile, goes to Anrakuji temple to hear the story that the ume tree that he loved in Kyoto came flying overnight. Umeomaru arrives at the scene and tells Kan Josho about Fujiwara no Shihei’s conspiracy in Kyoto. Kan Josho transforms into a thunder spirit from anger and ascends to heaven.

The most famous ume tree in Ukiyo-e is in “100 Edo landscapes: Kameido ume yashiki” by Utagawa Hiroshige. Vincent van Gogh copied this Ukiyo-e and titled “Japonaiserie Flowering Plum Tree”. Using extreme perspective, thick trunk is drawn big in front showing the strength of ume tree in contrast to the cuteness of the blossom.

Unlike the cherry blossoms that bloom in the middle of warm spring, ume blossoms bloom in the cold and clear air when the coldness of winter still lingers. Therefore in Ukiyo-e, ume blossom is a symbol of dignified beauty, and slim-but-hard branches of the tree is a symbol of strength. In “Yoru-ume binan sen” displayed here, an ume tree with a thick trunk and cute white blossoms are drawn in the back, seeming to symbolize the excellent performances and gorgeousness of actors.

In contemporary Japanese usage, when classifying the items or seats, there are cases that the word “sho chiku bai” is used for 3 levels of rank with the pine (sho) being the best and ume (bai) being the lowest.

Originally “sho chiku bai” is a Chinese subject for painting called “saikan no sanyu” (means “three friends in winter”). Even in coldness of winter, sho (pine) and chiku (bamboo) remain green and bai (ume) blossoms bloom, so in Japan they have been used as symbols of good omen.

In kabuki plays, ume is often used in characters’ names. The pen name as a haiku poet for Nakamura Utaemon III, a famous kabuki actor who often appears in the Kamigata Ukiyo-e paintings, was “ume-tama”. Ume-kuni and Yoshi-ume are the names of Ukiyo-e artists. Enjoy imagining what “ume” meant to the people at the time. 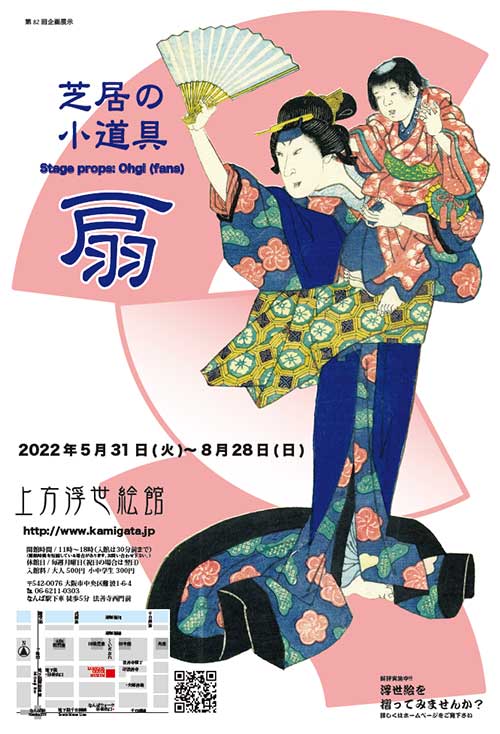