This museum exhibits ukiyo-e woodblock prints published in Osaka in the Edo period. Many of the ukiyo-e prints made in Osaka were portraits of kabuki actors performing on stage around Dotombori area, showing how the kabuki plays were at the time with colorful paints.

The costumes are especially gorgeous. The characters can be identified by their costumes even from spectators in back seats. Female role actors’ costumes have an even wider variety including a carefully-raised princess, a stylish ‘geisha’ and a female entertainer. For example, the costume of agemaki, a high-ranking courtesan, makes the stage look gorgeous.

In this feature exhibition, we focus on ‘uchikake’ which represents gorgeous costumes in kabuki plays. You can see in ukiyo-e noble uchikake for women from high-ranking samurai families and gorgeous uckikake for high-ranking courtesans (oiran). Please enjoy ukiyo-e depicting variety of uchikake that actors wear. 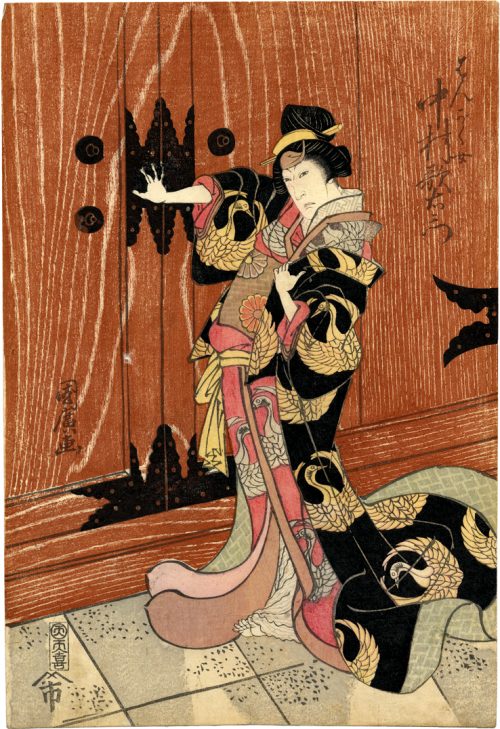 Uchikake
In present days uchikake generally means a bridal kimono. In and before the Edo period, uchikake was worn outside the actual kimono, kosode, like a robe trailing along the ground. It was a formal ‘over-kimono’ for women from samurai family.
In kabuki plays uchikake is used as a costume not only for a noblewoman from a high-class samurai family but also for a prostitute. Oiran, a high-ranking courtesan wears uchikake with elaborate design in order to show her dignity. Oiran is also called keisei, castle toppler, and their uchikake is extremely gorgeous. Their uchikake feature chrysanthemum motif such as Chinese lion peony and three-dimensional ones. In kabuki play, uchikake are designed not only to show wearer’s role but also to please spectators’ eyes.
Oiran’s gorgeous obi (kimono belt) tied at the front, red kimono collar to show sexiness, and with kanzashi and kushi (hair ornaments) gloriously decorated are all points to see along with uchikake.

Uchikake for noblewomen in samurai families
While a courtesan’s uchikake is gorgeous, a noblewoman’s uchikake is formal. The difference is depicted in ukiyo-e. Woven fabric uchikake is considered more formal than embroidered one, thus you can know the social status of the person by uchikake she wears.
If you look closely at uchikake drawn in ukiyo-e, you’ll find variety of fabrics including dappled ones, and variety of patterns such as letter-scattered, seemingly embroidered with golden thread. Noblewoman’s uchikake makes the kabuki stage more formal, dignified and stylish.
Uchikake is longer than kosode kimono worn inside and has ‘fuki’ (pad) along the hem so that uchikake doesn’t cling to the wearer. Dignified standing posture of katahazushi, a woman who serves samurai family, stands out by profoundness arising from uchikake’s beautiful pattern and trailing move along the floor.

Gorgeous costumes: kosode and furisode
While osode (big sleeve) has big wrist openings, kosode (small sleeve) has smaller wrist openings. Present-day kimono is categorized as kosode by the pre-Edo period standards. Strictly speaking, kosode is a silk garment with thin cotton sheets in it, and its sleeves are sewn to the body so you can’t swing (furi) the sleeves (sode). Furisode (swing sleeve) is a garment that sleeves are not sewn to the body so that you can swing the sleeves.
Daughters of feudal lords or aristocrats in kabuki plays generally wear furisode embroidered with golden thread on red fabric, thus they are called akahime, red princess. Daughters of wealthy merchants usually wear yuzen furisode. Daughters of townsmen wear kimono with hemp-leaf pattern or plum-blossoms pattern, describing their lovely and pretty character. Little boys before coming-of-age ceremony also wear furisode.
Wearing uchikake over kosode is too hot in summer, so people took arms out of the sleeves and wrapped upper-half of uchikake around their waist. It was called koshimaki style, waist wrap. In Noh play, a style of wearing kimono wrapped around waist is also called koshimaki. In ‘Nerimonozu’ which depicts prostitutes’ fancy dress parade, some wear Noh costume including koshimaki style.

Surihaku and nuikaku
Surihaku is a technique that creates patterns with golden or silver foil stenciled to the surface of the fabric. This technique is used for inner cloth of Noh costume. One of the major patterns is fish scale pattern. Nuihaku is a combination of embroidery and foil stencil. In Noh play, koshimaki with circle patterns on it is generally used for female demons.