This museum exhibits ukiyo-e woodblock prints produced in Osaka in the Edo period. Many of the ukiyo-e prints made in Osaka were lively depicted portraits of kabuki actors playing in theatres around Dotombori area.

In this feature exhibition, we focus on ichimatsu and other patterns used in kabuki plays. Through ukiyo-e, we introduce patterns of kabuki costumes, their meanings and originality. They are traditional and classic patterns but have been arranged into new, modern patterns. In particular, ichimatsu pattern has now become known to the world by Tokyo Olympic mascots and popular manga. We hope you’ll find your favorite pattern. 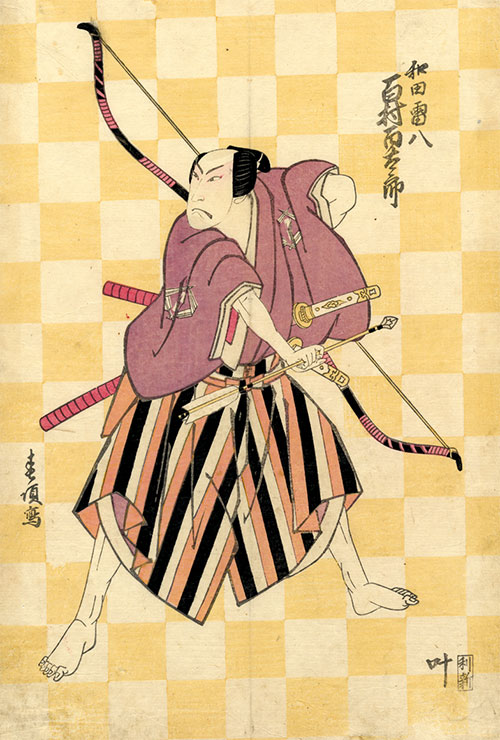 Ichimatsu pattern
Ichmatsu pattern is made with two different color squares placed alternately. Originally it was called ishidatami (cobblestone) or kasumi (haze) pattern. Kasumi (haze) was also called yusoku (knowledge possession) and used for the nobility’s clothings. In kabuki play “Kanjosho”, a story of a noble Sugawara no Michizane, an aristocrat in Heian Period, ichimatsu (kasumi) pattern is used and depicted in ukiyo-e.

People began to call this pattern ichimatsu when a kabuki actor Sanogawa Ichimatsu I (1772～62) used this pattern for his costume in the mid-Edo Period. The picture displayed here as Reference 1 is “Private prostitute Onayo at Gion-machi” drawn by Toshusai Sharaku III. This depicts her wearing ichimatsu.

Plays and costumes
Ichimatsu pattern became popular after an actor used it for his costumes. There are other patterns that has become classic for kabuki costumes.

For example, in kabuki play called ‘Soga-mono’ (a series of kabuki plays whose theme is vengeance by the Soga brothers), the elder brother Juro’s costume motif is plover, and the younger brother Goro’s costume motif is batterfly. These motifs are from the classic tale “Soga monogatari”, describing the two characters by their costumes with motifs on them. In kabuki play “Sugawara Denju Tenarai Kagami”, main characters’ costumes motifs are linked to their names; Matsuo-maru (matsu, pine), Umeo-maru(ume, plum) and Sakura-maru(sakura, cherry blossom). This is the typical example of linking of names and patterns.

At the raid scene in the very famous kabuki play “Kanadehon Chushingura”, main character, Oboshi Yuranosuke, and his 47 samurai warriors, wear firefighter’s costume with a mountain motif (iriyamagata) on it (see Reference 3), impressing the audience their unity. It is said that this iriyamagata motif was taken in to the costume of famouse “Shinsengumi” because they wanted to share the good luck of 47 samurai warriors. Look at the costume patterns that represent plays’ stories and characters.

Reference 3
Genji-guruma (Genji wheel) in “Yoshitsune Senbon Zakura”
A wheel design of oxcart or imperial cart is called Genji-guruma. In kabuki plays, Genji-guruma motif shows that the person wearing it is for Genji clan in Genpei (Genji clan vs. Heike clan) wars.

Actors and costume patterns
Actors’ portraits are drawn in order to please fans of kabuki plays and kabuki actors, but it is also an advertisement. In order to win popularity and gain more fans, many actors created a pattern that is connected to their name and wore costume of the pattern, trying to set a trend.

Once a pattern is drawn in ukiyo-e, kimono shops begin to sell kimono of the pattern, then fans buy and put them on as kimono or obi, thus the actor’s name goes more viral.

Patterns that was created by kabuki actors and drawn in ukiyo-e are still used now-a-days in kabuki world as actors’ yukata (informal cotton kimono) or tenugui (Japanese cotton towel).

Reference 1
Ichikawa Family
Ichikawa Family’s crest is Mimasu, and patternized design of that crest is called Mimasu-tsunagi or Rokuyata-goshi. The Mimasu is said to be three nested square boxes looked from above. Kamawanu means in Japanese ‘I don’t care’. The word kamawanu consists of three parts; Kama (sickle), wa (ring) and nu (hiragana). Ichikawa Danjuro VII used the design on his costume, and as the word was related to his performance, it has become a symbol of Ichikawa Family and drawn in ukiyo-e.

Reference 3
Shikan-jima (Shikan stripe)
This pattern is made up of four (‘shi’ in Japanese) lines and cabinet drawer handle (‘kan’ in Japanese) which makes the sound ‘shi kan’.

Reference 4
Ibishi
A diamond-shaped pattern which is made up of four same letters ‘イ’ (i) . Today it is Nakamura Ganjiro Family’s crest.

Reference 5
Matsu (pine) -mon (crest)
Nakamura Matsue III used the pine shaped crest because there is ‘matsu’ is included in his name.

Reference 6
Ribishi
A letter ‘り’ (ri) of Arashi Rikan is placed in a diamond shape.

Reference 7
Kichi-bishi
A letter ‘吉’(kichi) of Arashi Kichisaburo is connected into a diamond shape.