This museum exhibits ukiyo-e woodblock prints produced in Osaka in the Edo period. Many of the ukiyo-e prints made in Osaka were portraits of kabuki actors playing in theatres around Dotombori area. You can feel the vitality of actors playing a role in costume by looking at ukiyo-e.

All classes of people, townsmen to samurai warriors, and men, women, young and old, appear in kabuki plays. A scene that a villain gets punished after he unsuccessfully hunts down a hero makes the story exciting. But not only villains do wrong and commit a crime.

In this feature exhibition we focus on the ‘crime and punishment’ that deeply relates to the story. Ishikawa Goemon is famous as a thief, but in some plays he is described as a hero. There is a mental conflict that compels a person to commit the crime even if the person could get punished: a conflict that cannot be judged by law. Please try to judge characters in kabuki plays as you enjoy the exhibition. 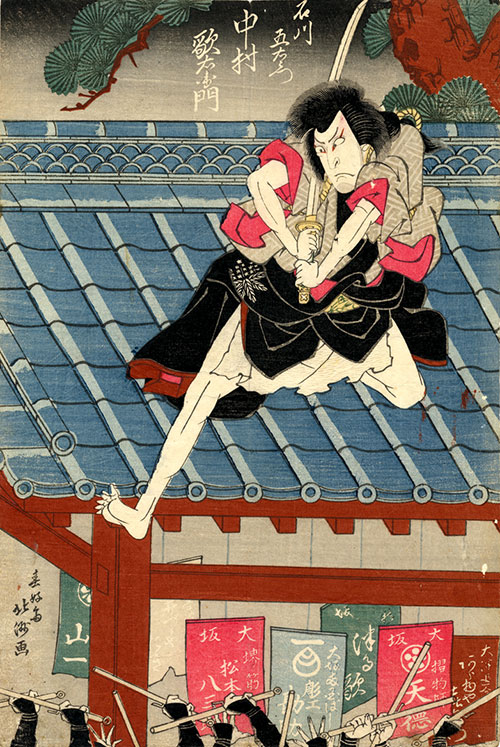 Ishikawa Goemon, the thief
A thief was boiled alive to death on the riverside at Sanjo, Kyoto in 1594 (Bunroku 3). Actual Goemon only appears in the execution record that was orderd by Toyotomi Hideyoshi. Goemon, whose life is coloured by various episodes, and Toyotomi Hideyoshi, who successfully reached the top and became the ruler of Japan; the comparison of these two people has created excellent rivalry stories.

According to the punishiment that Goemon received, an iron pot-shaped bathtub became to be called ‘Goemon-buro’ (Goemon bath). In kabuki play ‘Kamagafuchi futatsu domoe’, the execution scene is the climax. Goemon married Takigawa, a courtesan, and took in and bring up his son from his ex-wife. Takigawa intentionally treated the boy coldly so that he go back to his mother; Takigawa didn’t want the boy to be punished together as Goemon’s son. Goemon ran holding his son as he got away from pursuers but was finally caught. He and his son were together boiled to death.

In a kabuki play titled ‘Kinmon gosan no kiri’, Goemon is in fact a son of Sosokei, a vassal of the Ming dynasty emperor. He is brought up by Takechi Mitsuhide, targeting Mashiba Hisayoshi (Hideyoshi) as an enemy. ‘Sanmon gosan no kiri’ is a part of ‘Kinmon Gosan no kiri’ and is known for the famous line ‘What a magnificent view! What a magnificent view!’ ‘Ishikawaya hamano masagowa tsukirutomo yoni nusuttono tanewa tsukimaji’ (Even if the sand on the shore runs out, thieves will always exist) is said to be Goemon’s farewell poem, but in this drama it is Hisayoshi who composes the poem.

In a kabuki play titled ‘Konoshitakage hazama gassen’, Goemon and Konoshita Tokichi (Hideyoshi) are childhood friends; in ‘Hadekura Ishikawazome’, eccentric performance such as hanging in midair is adopted; thus Goemon’s character became to be described more and more extraordinary as he got popular.

Among them the most famous murder scene is in ‘Natsumatsuri naniwa kagami’. In this play, Danshichi-Kurobei, hero, has no choice but kill his greedy father-in-law, Giheiji, to protect his benefactor. Danshichi and Giheiji’s typical kabuki motions and posings with bustling festival music on the background make beautiful kabuki style.

Blood glue may be used in a murder scene such as in ukiyo-e ‘Yotsuya Kaidan’. Oiwa’s red blood clearly expresses the heinous act of Iemon and the family of Iemon’s lover. Iemon, Oiwa’s husband, intends to get rid of Oiwa and Iemon’s lover’s family poisons Oiwa to kill her.

Also in ‘Totenko’ chapter in a kabuki play ‘Sugawara denju tenarai kagami’, Naoya (Sukune) Taro and his father plan to take Kanjosho out and kill him. In order to do so, first they kill Taro’s wife, Tatsuta, who eavesdropps the plan and sink her into the pond. The crime was later revealed and Taro was killed by Tatsuta’s mother, Kakuju.

Ghastly murder scene becomes an entertainment by actions, blood glue, and stage devices such as the revolving door. And the audience can feel satisfied to see the crime being punished.

Even if I’ll be punished
In a kabuki play ‘Natsumatsuri naniwa kagami’, Danshichi had no choice but kill his father-in-law. Knowing that it was against the law, he still had to sacrifice himself and commit the crime. This kind of mental conflict deepens the role and character.

In ‘Kanadehon chushingura’, even though it was prohibited to draw the sword in the castle, Enya Hogan (Asano Takuminokami) did so and kill Kono Moronao (Kira Kozukenosuke) because Kono Moronao insulted Enya Hogan. Hayano Kanpei went down in the world and became a hunter because he was with his lover when his master needed him. Later Kanpei commits seppuku (hara-kiri) after he was found to carry his father-in-law’s wallet (the truth is he killed bandits in revenge for his father-in-law). Oboshi Yuranosuke (Oishi Kuranosuke) was prepared to pay with his own life for the crime of raid even though that was a vengeance for his master.

In ‘Futatsu chocho kuruwa nikki’, Nuregami Chogoro had no choice but to kill a person to help Yogoro, his patron. To flee from the pursuers Chogoro asked his mother to shelter him, but her son-in-law was a police officer. Finding out that Chogoro was his mother’s real son, the officer decided to let Chogoro go away, describing the act as Hojoe (letting cratures go at large)

In ‘Datemusume koino higanoko’, Oshichi, who fell in love with Kichisaburo, a temple-servant, desperately wanting to see Kichisaburo again, rang the alarm bell at the fire lookout tower, which was prohibited to ring without reason. In ‘Minori aki sakura-no nigiwai’, Sakura Togoro (Sogoro) was executed after he appealed about the plight of peasants directly to shogun, even though the appeal letter was accepted.

Long-run kabuki plays depict not only the crimes and conflicts but also support and forgiveness of people around. 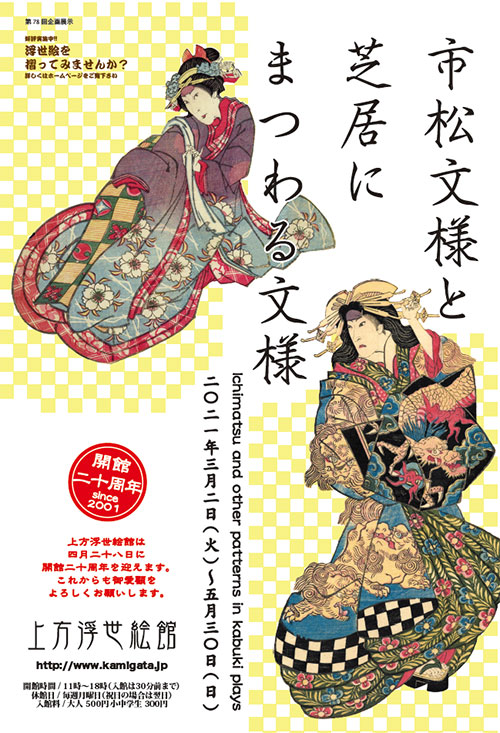