“Now that I’ve seen you here, you’re finished.”
– Getting justice done in Ukiyo-e – 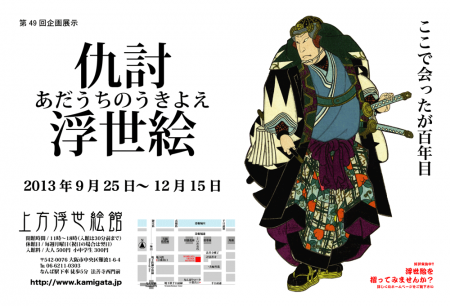 This museum exhibits Ukiyo-e prints and paintings produced in Osaka in the Edo period. Most of them are of the actors playing Kabuki in theatres mainly in Dotombori area.

Some of the most popular Kabuki plays at the time have still been repeatedly played until today, including the most famous “Kanadehon-chushingura”, loyalty-revenge story by Ako-roshi, masterless samurai in Ako.

In this feature exhibition, we focus on the Ukiyo-e of the revenge plays. Taking revenge involves various kinds of tragedy including hardship in searching for the foe and the risk of being killed by the foe. I hope you enjoy the “revenge drama” in Ukiyo-e, which is still very popular.

Katakiuchi Sozenji Baba
Enjo Jizaemon and Ando Kihachiro seek revenge upon Ikuta Denhachiro, who killed their brother. The brothers confront him at the riding ground of Sozenji temple, but are killed by Ikuta Denhachiro who came with a lot of outside help.

Igagoemono
Wada Shizuma kills Sawai Matagoro for revenge who killed his father, with a help from Karaki Masaemon. Among other acts of this drama, the most popular act is “Numazu”, in which Heisaku, the father of Shizuma’s lover, gets information of Sawai Matagoro’s whereabouts from Jubei, who is in fact Heisaku’s son who was given for adoption. 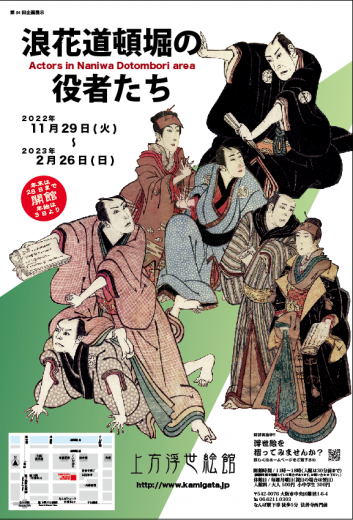