This museum exhibits ukiyo-e woodblock prints produced in Osaka in the Edo period. Many of the ukiyo-e prints made in Osaka were portraits of kabuki actors performing on stage, depicting how the stage was like at the time.

Kabuki in Osaka were played in theatres such as Naka-za and Kado-za in Dotombori area. Kabuki that were played in these theatres were called ‘oh shibai’ (grand play). Many of the portraits were of actors playing in these ‘oh shibai’ theatres. There were also ‘chu shibai’ (intermediate play) or ‘hama shibai’ (seashore play), which were played in theatres in Kita-shinchi and Horie, not in Dotombori. ‘Chu shibai’ or ‘hama shibai’ were popular because they were less expensive and more casual entertainment. But portraits of kabuki actors of ‘chu shibai’ were also produced and sold, meaning it was also very popular.

In this feature exhibition, we tour around kabuki theatres in Osaka such as those in Goryo Shrine and in Temma Tenjin Shrine as well as in Dotombori area. Please enjoy the most popular performances in each theatres. 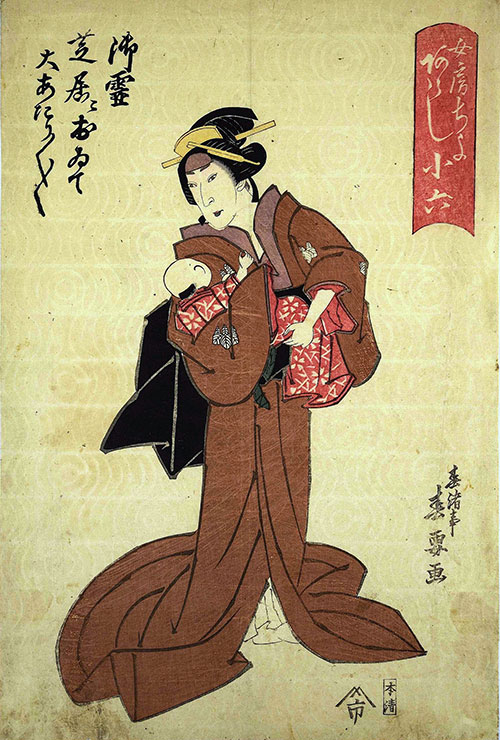 Naka no shibai (Naka-za)
Naka no shibai started in 1652 (Jo-oh 1) by Shioya Kuroemon when the license to promote kabuki in Dotombori area became necessary. The theatre was said to have been built in the present site in 1661 (Kanbun 1). It is located between Onishi shibai and Kado no shibai, thus it is called Naka no shibai (theatre in-between). Naka no shibai thrived along with Kado no shibai as ‘oh shibai’ theatres. Name succession ceremonies of Arashi Kitsusaburo II and Jitsukawa Gakujuro II were held in this theatre and their performances were depicted in ukiyo-e. Kabuki and Shochiku Shinkigeki (comedy drama) were performed in this theatre until it was closed in 1999 (Heisei 11).

Kado no shibai (Kado-za)
Kado no shibai started in 1652 (Jo-oh 1) by Osaka Tazaemon when the license to promote kabuki in Dotombori area became necessary. In 1669 (Kanbun 9), a drum tower was said to have been built at the site of Kado no shibai as a symbol of government approval. It is called Kado-za (theatre at the corner) because it is located at the southern corner of Tazaemon Bridge. The theatre is very famous for its rotating stage and the visit by Philipp Franz Balthasar von Siebold, being a representative theatre in Dotombori area along with Naka no shibai. Co-starring performance of Arashi Rikan I and Nakamura Utaemon III, both were very popular kabuki actors, was planned to be held in this theatre, but it didn’t come true because of Arashi Rikan’s sudden death. It was rebuilt after burnt down in an air raid in WWII; became movie theatre in 1986 (Showa 61) and closed in 2007 (Heisei 19).

Chikugo shibai (Naniwa-za)
In 1684 (Jokyo 1), it was originally established as Takemoto-za, a puppet theatre (ningyo joruri) by Takemoto Gidayu. Having Chikamatsu Monzaemon as a permanent dramatist, famous plays including ‘Kokusen-ya Kassen’ and ‘Sonezaki Shinju’ were played. It became popular by competing with Toyotake-za, also a puppet theatre. But as kabuki became more popular, the theatre converted to kabuki theatre in 1767 (Meiwa 4). As it is located at the west end of Dotombori, it is also called Onishi shibai (big west theatre). It was burnt down in a fire in 1876 (Meiji 9), and rebuilt and named Ebisu-za, and later again renamed Naniwa-za. Closed in 2002 (Heisei 14).

Takeda shibai
In 1662 (Kanbun 2), Takeda Omi, a karakuri artist, started performing karakuri show in this theatre. In “Settsu Meisho Zue”, a guidebook to the famous or beautiful places of Settsu, a Dutch person enjoying a karakuri show is depicted. After the Meiji period, the theatre name was changed to Benten-za. In the Taisho period, a theatre company Shinkokugeki performed in the theatre. Later it became Dotombori Bunraku-za as a center of bunraku but was closed in 1984 (Showa 59) when National Bunraku Theatre was opened.

Wakatayu shibai (Hanei-za)
It first started as Toyotake-za by Toyotake Wakatayu in 1703 (Genroku 16) after he changed his name from Takemoto Uneme. He was a disciple of Takemoto Gidayu, founder of Takemoto-za. Toyotake-za saw the golden age of ningyo joruri by competing with Takemoto-za, but was closed in 1765 (Meiwa 2) when Wakatayu died. After that it became kabuki theatre named Wakatayu shibai. It was burnt down in 1876 (Meiji 9) and rebuilt as Hanei-za, but was burnt down again in the following year and closed.

“Gekijo manroku”, a guidebook for theatregoers in the Edo period, published in 1825 (Bunsei 12), says “In Osaka, there are three ‘oh shibai’ theatres: Onishi shibai, Naka no shibai and Kado no shibai. And there are three ‘hama shibai theatres: Kadomaru, Takeda and Wakatayu. In theatres located in Kita-shinchi and Horie, ‘oh shibai’ and ‘hama shibai’ are both played. In districts such as Amidaike, Zama, Goryo, Inari, Ajikawa, there are ‘chu shibai’ and ‘kodomo shibai’ theatres. Kabuki plays are sometimes performed also in Temma.”

Nakamura-za
Theatres of Edo kabuki were called ‘Edo san-za’ (three theatres in Edo): Nakamura-za, Ichimura-za and Morita-za. These three theatres were authorized by the government to play kabuki. Originally Nakamura-za was in Sakaimachi (near present Nihonbashi Ningyocho 3), Ichimura-za was in Fukiyacho and Morita-za was in Kobikicho, all in present Tokyo, but from 1841 (Tempo 12), taking 13 years, they were all moved to the town called Saruwakacho, east-northeast area of Sensoji.
Nakamura Utaemon, kabuki actor in Osaka, also performed at Nakamura-za. Arashi Tokusaburo made speech in this theatre before he went back to Osaka for name succession. 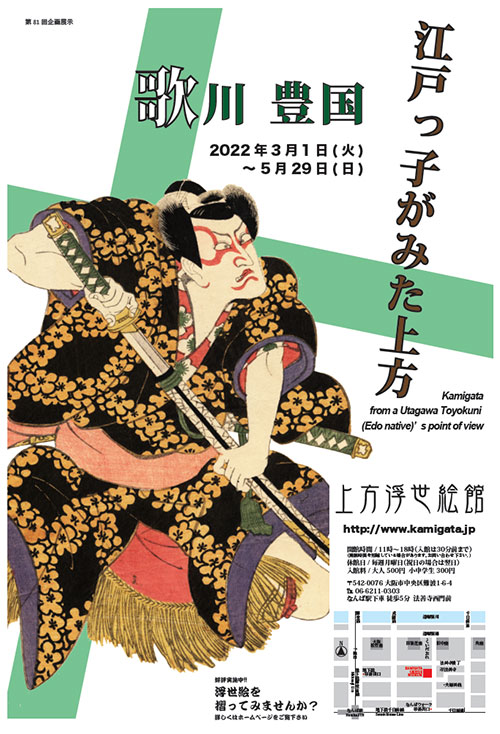