This museum exhibits ukiyo-e woodblock prints produced in Osaka in the Edo period. Most of the ukiyo-e prints made in Osaka were portraits of kabuki actors, through which you can see how kabuki plays were performed in Kamigata (present Kansai) in theatres in Dotombori area.

On kabuki stages the four seasons are richly described and programs are carefully selected in accordance with the season. In spring, especially in March, when women serving in samurai family took annual holidays, people liked to enjoy more gorgeous plays such as ‘goten-mono’ (kabuki plays set in a palace) or ‘sukeroku’ (one of the most popular plays). These plays were called ‘yayoi kyogen’ (‘yayoi’ is a traditional Japanese term for March, kyogen is a comedy originated from Noh).

In this feature exhibition we focus on ‘goten-mono’, kabuki plays that is set in a palace. The exhibition includes woodblock prints of ‘meiboku sendai-hagi’, a play in which women who work for samurai family play an active part. And we also focus on how women are described in ukiyo-e and their roles. Please enjoy spring in kabuki plays. 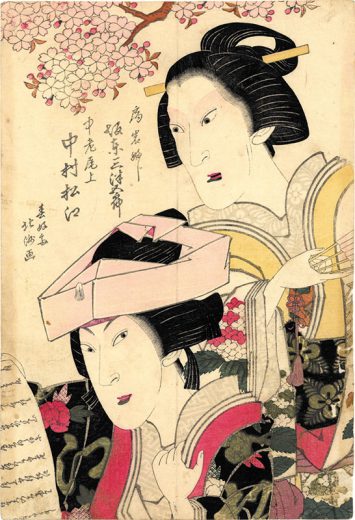 Goten-mono
Kabuki year started in November in the Edo period, when ‘face-showing’ performance of contract actors was held. When the new year came ‘nino-kawari’ (second version), or spring performance, was held with a traditional title ‘keisei’. After that around March, ‘sanno-kawari’ (third version) was held with many ‘full-of-spring-atomoshere’ programs.

In Edo area, March was the month when women working for Daimyo (feudal lord) or their harem took annual holidays, therefore ‘goten-mono’ was often chosen to be played. ‘Goten-mono’ is a kabuki play that is set in a palace of aristocrats and samurai warriors, familiar world to the women working there.

‘Meiboku sendai-hagi’, one of the most popular ‘goten-mono’, is based on a domestic feud in the Date clan of Sendai Domain. Famous and popular kabuki scenes such as Masaoka, who protects her master at the expense of a life of her own son, witchcraft of evil Nikki Danjo, and rough style acting by Otokonosuke, are included in this play, making this play very popular even today.

Kata-hazushi women
Kata-hazushi was a hair-style for women serving samurai family. The hair was wrapped around kougai, Japanese traditional stick-shaped hair-pin, making a big ring. They used to updo their hair at work but by removing the kougai the hair dropped down to be a simple tied style.

Kata-hazushi-style wig was used mainly by kabuki actors playing the role of wives of samurai or wet nurses serving samurai family. Masaoka’s hair style is also kata-hazushi. The role wearing kata-hazushi is often important and the role itself is called kata-hazushi.

A role of kata-hazushi hair style woman is important, and its character is often patient and dignified, and has as strong character as a samurai warrior. On the other hand, a simple tied hair style shows softness and elegance.

Chidori in ‘Hirakana seisuiki’ is a koshimoto woman serving the Kajiwara clan and falls in love with Genta. She later dares to become prostitute to support him. Nureginu in ‘Honcho nijushiko’ is a koshimoto woman serving the Takeda clan. She was a lover of fake Katsuyori (real Katsuyori’s imposter) who sacrificed himself and died by ritual suicide (hara-kiri). After the death of fake Katsuyori, Nureginu and real Katsuyori in disguise sneakes into the Nagao’s palace.

While a kata-hazushi woman had their eyebrows shaven and teeth blackend, a koshimoto woman updo her hair into shimada style and young and fresh. A koshimoto woman closely serves their master to do chores, so there are many ‘love and trust’ stories or spy stories in kabuki.

Gorgeous palace
‘Goten-mono’ is a kabuki play that is set in a palace of an aristocrat or a samurai, so the stage is a gorgeous palace with gorgeous settings with fusuma (Japanese traditional sliding doors) with the family crest or pictures on them, senjojiki (large numbers of tatami mats) that makes the stage look like a big saloon, and the lord’s seat that is placed several steps higher than others (kato-guchi). 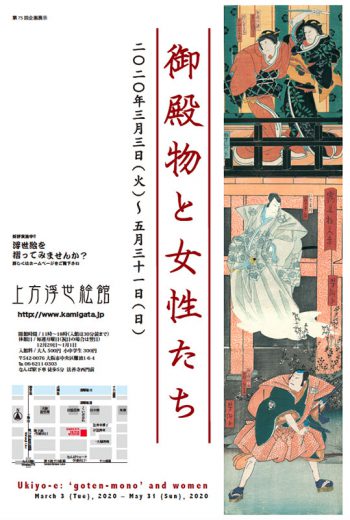